Corporal Baird was a member of the Special Operations Task Group and was from the 2nd Commando Regiment based at Holsworthy Barracks in Sydney, New South Wales.

Corporal Baird was born in Burnie, Tasmania in 1981. He joined the Army in January 2000 and upon completion of his initial employment training was posted to the then 4th Battalion (Commando), The Royal Australian Regiment, now the 2nd Commando Regiment, in February 2000.

Corporal Baird was an outstanding Special Forces soldier. He exemplified what it meant to be a Commando, living by the attributes of uncompromising spirit and honour, which in turn earned him the unconditional respect of his fellow Commandos. His leadership in action was exemplary, constantly inspiring those around him to achieve greater things. Corporal Baird was an extremely dedicated and disciplined soldier, always striving for excellence in everything he did.

Corporal Baird died how he lived – at the front, giving it his all, without any indecision.  He will forever be remembered by his mates and the soldiers he served with in the 2nd Commando Regiment.

Cameron was killed on operations in Afghanistan on 22 June 2013. 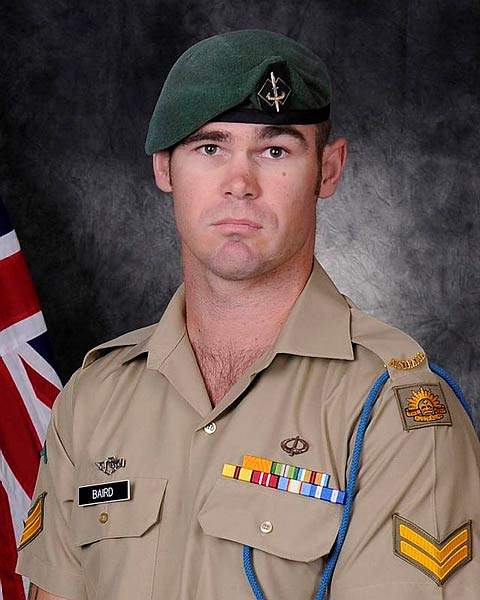